Steve Helmich, Chief of Police
Mobile (312) 371-1120
Email steve.helmich@outlook.com
CHAPIN POLICE DEPARTMENT RELEASES IDENTITY OF INJURED
OFFICER FROM MULTI-AGENCY INCIDENT ON MARCH 26, 2022
Chapin, IL – The Chapin Police Department has identified the officer injured in the multi-agency incident in rural Brown County on March 26, 2022, as Chief of Police Steven Helmich. Chief Helmich, 39, of Jacksonville, sustained two gunshot wounds and was transported via medical flight to a regional Level I trauma hospital in critical condition. As of the date of this release, Chief Helmich’s medical condition is stable, however, he remains hospitalized.
Chief Helmich has been a police officer for seven years. He has been a member of
the Chapin Police Department since September 2016, previously serving as a patrol officer and later as a Sergeant. Chief Helmich was appointed as the Chapin Chief of Police in January 2022. Additionally, he has served the South Jacksonville Police Department as a part-time patrol officer since November 2017.
Chief Helmich is a native of Jacksonville and a graduate of Jacksonville High School.
In addition to his law enforcement service, he has served in the Illinois Army National
Guard since June 2002. He is a Master Sergeant, and is currently assigned as an
Assistant Inspector General in the Illinois National Guard’s headquarters located at
Camp Lincoln in Springfield. Chief Helmich’s military service includes a combat tour in Iraq supporting Operation Iraqi Freedom 2005-2006, and a peacekeeping tour in Egypt in support of the Multinational Force and Observers 2010-2011. He has supported several past State Active Duty operations, including Mississippi and Illinois River floods, civil unrest, and Covid-19 support to communities throughout the state.
He plans to retire from the military later this year, but continue his law enforcement service to the Morgan County area.
Chief Helmich is a member of the Fraternal Order of Police Lodge 125, the Illinois Association of Chiefs of Police, and the Central Illinois Association of Law
Enforcement Executives; and a lifetime member of the National Guard Association
of Illinois and the Enlisted Association of the National Guard of the United States.
This incident remains an ongoing investigation being conducted by Illinois State Police Zone 4 Investigators and the Brown County State’s Attorney’s Office. Chapin Police will not release additional details at this time. Questions should be directed to the Illinois State Police Public Information Office at ISP.PIO.Personnel@illinois.gov
or the Brown County State’s Attorney’s Office.

If you have a tip about a crime, 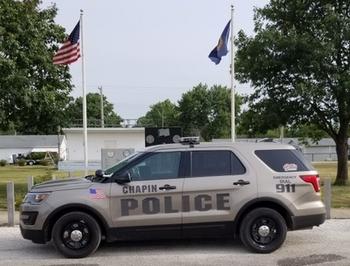 An incident involving the Village of Chapin Police Department occurred late Saturday night, March 26, 2022. During the incident, a Chapin Police Officer was shot resulting in serious injuries to the officer, who remains hospitalized. The incident is under investigation by the Illinois State Police.

At this time, the Village is unable to comment further regarding the incident nor is it able to disclose the name of the officer involved. The Village will provide more information as soon as it is able to do so.

Our prayers and well wishes go out to the Officer and his family. We ask that everyone pray for the health and speedy recovery of this most dedicated Police Officer and outstanding individual.

Any questions or inquiries should be directed to the Illinois State Police and the Brown County State’s Attorney’s Office.

A Great Place to Call Home